Alzheimer’s disease is a brain disorder that slowly destroys memory and thinking skills, and, eventually, the ability to carry out the simplest tasks. In most people with Alzheimer’s, symptoms first appear later in life. Estimates vary, but experts suggest that more than 6 million Americans, most of them age 65 or older, may have dementia caused by Alzheimer’s.

Alzheimer’s is the most common cause of dementia among older adults. Dementia is the loss of cognitive functioning — thinking, remembering, and reasoning — and behavioral abilities to such an extent that it interferes with a person’s daily life and activities. Dementia ranges in severity from the mildest stage, when it is just beginning to affect a person’s functioning, to the most severe stage, when the person must depend completely on others for help with basic activities of daily living. 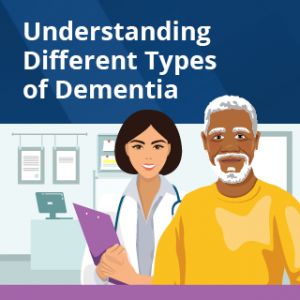 To learn more about Alzheimer’s and dementia read the full article from the National Institute of Aging here.