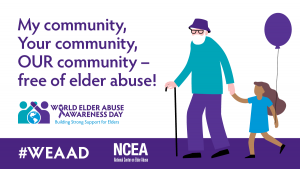 World Elder Abuse Awareness Day (WEAAD) offers an opportunity to bring awareness to elder abuse, neglect, and exploitation in our communities. Elder abuse causes great financial and personal costs, including premature death. In a 2019 study, IA2 Research Manager Jolie Crowder found that approximately 33% of American Indian and Alaska Native (AIAN) older adults had experienced abuse in the past year and 24.7% had experienced emotional abuse since age 60. Many more cases go unreported. Elder abuse is a complex and growing challenge as the AIAN older adult population increases.

WEAAD was launched on June 15, 2006, by the International Network for the Prevention of Elder Abuse and the World Health Organization. Tribal elder protective services are few and significantly under resourced. Federal legislation on elder abuse often does not include tribes including the Elder Justice Act.

On WEAAD 2021, the International Association for Indigenous Aging calls for greater recognition and resources for preventing and addressing elder abuse against AIAN elders, and is pleased to be joined by the National Adult Protective Services Association in calling for including tribes in the re-authorization of the Elder Justice Act.