< Back to all Wandering resources 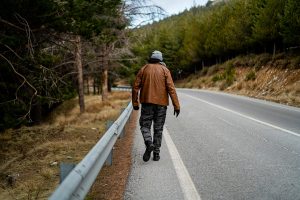 We’ll see more senior citizen wanderers in cities, parks, suburbs, and wilderness. Search and rescue teams do their best to mitigate the often-devastating effects of wandering, but they can’t prevent the incidents.

Richard Byrd, a 64-year-old rancher from Vaughn — a small town in the vast, flat eastern plains of New Mexico — was found dead last month on his sprawling 30,000-acre ranch. It was the third time in two years that volunteer search and rescue teams — at times assisted by state police and national guard helicopters — had been called to find him. Suffering from Huntington’s disease, Byrd had wandered yet again from his remote family ranch, where he lived with his wife Judy.

We will see more Richard Byrds — perhaps many of them, as the U.S. population ages. We’ll see more senior citizen wanderers in cities, parks, suburbs, and wilderness. Search and rescue teams do their best to mitigate the often-devastating effects of wandering, but they can’t prevent the incidents. That’s a job for caregivers and relatives. Collectively, we need to find better ways to keep dementia wanderers from dying, confused and alone, without a single caregiver, SAR team or police officer in sight.

Could the Richard Byrd tragedy have been prevented? Possibly not. According to the Alzheimer’s Association, more than six of every 10 people with dementia will wander. The Mayo Clinic adds that Huntington’s disease “has a broad impact on a person’s functional abilities and usually results in movement, thinking (cognitive) and psychiatric disorders.” The Alzheimer’s Foundation of America warns that Huntington’s disease “profoundly affects the lives of entire families — emotionally, socially and economically.”

Still, good caregiving options exist, according to Chris McCaffrey of the New Mexico Alzheimer’s Association. “The key step is to create an individualized plan of care,” he says. The Alzheimer’s Association offers cost-free assistance and a 24-hour hotline for anyone who requests help. Plans may involve things like medication analysis, cessation of caffeine, and establishing regular sleep patterns for the person. Other tools may include installing hard-to-reach slide bolts for doors, disguising doors with paint or hanging towels, and use of GPS tracking devices — some of which can be hidden in shoes or clothing. None of the methods are foolproof, McCaffrey notes.

According to the Centers for Disease Control and Prevention (CDC), Alzheimer’s disease is the most common form of dementia, although several others exist, such as vascular dementia, Lewy Body disease, Parkinson’s and Huntington’s diseases. Celebrated American folk musician Woody Guthrie was diagnosed with Huntington’s in 1952 and lived for another 15 years, finally dying of its complications. Following his death, Guthrie’s widow Marjorie helped found the Committee to Combat Huntington’s disease, which today exists as the Huntington’s Disease Society of America.