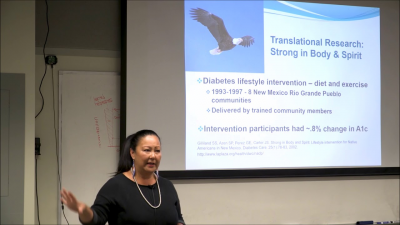 Treatment may need to account for clinical, genomic, biomarker, cultural, and environmental factors with data on health behaviors to assess individual risk of a given disease. “It is hoped that, as is becoming true in cancer care, more precise medicines will eventually allow tailored AD care,” said Kaʻimi Sinclair, one of a dozen investigators on NEAR. “We have very little data about AD in American Indian, Alaska Native, Native Hawaiian, and Pacific Islander populations. Reliable data indicate that the number of older persons in these communities 65 years of age and older will double by 2050, and the number 85 and older will increase 7-fold. “NEAR is a project that has real potential to address disparities,” emphasizes Sinclair.

Illustration or link NEAR A is a multi-site, multi-year, multi-million-dollar effort led by Washington State University.

Until now, no research has addressed Native preferences for communicating educational or recruitment information for AD studies. Native peoples typically prefer visual aids and stories that increase comprehension and effective communication and align with Native traditions.

It is well documented that major tissue banks and both short- and long-term studies do not enroll American Indian, Alaska Native, Native Hawaiian, and Pacific Islander persons in those programs in numbers even close to their proportion of the general population.

NEAR will have several satellite locations that will engage local Native communities. NEAR has 12 key collaborators who are American Indian, Alaska Native, Native Hawaiian, and Pacific Islander, which is a first and an achievement that NEAR Center Principal Investigator and director Dedra Buchwald has been working toward for many years. “All of our work includes Native scientists in leadership positions and community advisors in key roles,” stated Buchwald. Projects include developing and testing provider training to improve detection of dementia in health clinics, using hula dancing as a cultural intervention to delay cognitive decline, and examining the role of sleep apnea and the risk of dementia in later life. “It’s really exciting to work with indigenous serving organizations to build awareness and engagement, developing research questions from the community outward to the clinic,” said Sinclair.

NEAR will be at the forefront of engaging Native communities in conversations concerning their concerns and preferences regarding simple tissue donation to catalog more risk factors and genetic information in these underrepresented communities. Follow the work at www.ireach.wsu.edu.