Research teams at 5 places across the country, led by the Centers for American Indian and Alaska Native Health at the Colorado School of Public Health, are testing a culturally tailored version of the AD8. 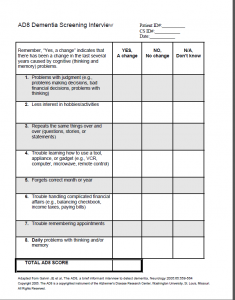 The AD8 is an 8-item form that can help determine if a person might have dementia. It was originally designed as an “informant-based” assessment, meaning instead of an elder being questioned, someone who knows the patient for example a spouse, child, or non-family caregiver) is asked to assess whether there have been changes in the past few years in areas of memory, thinking, and function. It has now been proven valid for use with elder directly.  The AD8 only takes about 3 minutes and includes yes or no questions.

The original version has been tested for use in multiple languages and with diverse groups of people including non-white and white participants.

The culturally adapted version for American Indian and Alaska Native people has not been officially validated by researchers, though community testing is underway. Two of five sites working with the Center have completed testing in their local communities.

Several of the satellite Centers embedded the revised AD8 in to a larger needs assessment, so there is ongoing analysis of the other factors associated with a positive or negative AD8 response. 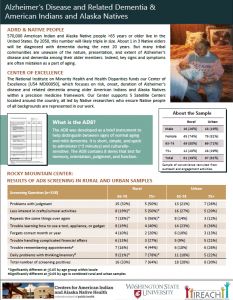 The Rocky Mountain satellite research Center has completed testing of the culturally adapted AD8 in local communities that included both rural and urban elders. Tested with 158 elders, 1/3rd (33%) of those people aged 65-74 in rural areas had a positive test (potentially have dementia), and approximately the same (28%) percentage of elders 65-74 in the urban group also tested positive. Click to learn  more about the Rocky Mountain team’s results.