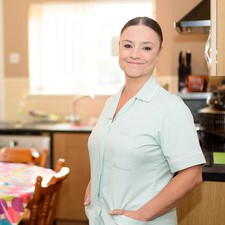 The Missouri Department of Health and Senior Services’ (MDHSS) Bureau of Cancer and Chronic Disease Control partnered with CHWs to raise awareness of the early signs of Alzheimer’s disease. The CHWs used the AD-8 Alzheimer’s assessment tool to identify clients with signs of dementia and refer them to physicians for formal screening and diagnosis. CHWs also educated their clients about how to preserve brain health though good nutrition and physical activity.

The AD-8 tool was chosen as it can be quickly administered in a client’s home. CHWs were educated about the AD-8 tool during a meeting of Missouri’s Community Health Worker Advisory Board.

A web-based training module for CHWs is also available online, through Washington University. Over 500 CHWs and other public health professionals have learned about using the AD-8 tool and its advantages in identifying people with signs of dementia.

In addition to the AD-8, MDHSS worked with CHWs to raise awareness by providing them with packets of information provided by the Alzheimer’s Association. CHWs were also able to learn more by attending statewide meetings held by the Missouri Primary Care Association.

Information extracted from: Community Health Workers: A Resource for Healthy Aging and Addressing Dementia created by the Alzheimer’s Association and the Association of State and Territorial Health Officials.