The International Association for Indigenous Aging (IA2) celebrates Native American Heritage Month this November. National Native American Heritage Month empowers American Indians and Alaska Native people from all around the country to honor traditions, culture, history, and livelihood on ancestral lands. This is an opportunity for Native representation to raise visibility within our Nation and others can join in through awareness, education, and celebration of Native people. 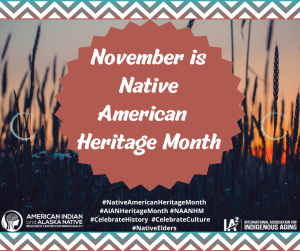 For many, Native American Heritage Month is only recognized once a year in November, but our heritage is something to celebrate every day.  Native American Heritage Month also provides a special opportunity to honor the role Native elders play in their communities. Elders are keepers of sacred tribal knowledge and keep culture and traditions alive. The month of recognition and reflection follows a Biden administration proclamation to establish Indigenous People’s Day in 2021, the second Monday in October every year.

That proclamation begins with a powerful assessment of Native contributions. “Since time immemorial, American Indians, Alaska Natives, and Native Hawaiians have built vibrant and diverse cultures—safeguarding land, language, spirit, knowledge, and tradition across the generations.”

President Biden follows that “for generations, Federal policies systematically sought to assimilate and displace Native people and eradicate Native cultures.”  He commits to “a future grounded in Tribal sovereignty and respect for the human rights of Indigenous people in the Americas and around the world.”

In his concurrent acknowledgment of Columbus Day (set forth by Congress in 1934 and affirmed in 1968), he recognizes the atrocities inflicted upon Indigenous communities and tribal nations at the hands of European explorers.

The most recent proclamation of National Native American Heritage Month notes the perseverance, strength, and historic contributions of American Indian and Alaska Native people. We are heartened as we reflect on the many examples of success and resilience–some that may not be the legends of storybooks, but are shining examples, nonetheless.

Renowned individual Native contributions over the decades include John Herrington (Chickasaw)—the first Native American in space.  Herrington, a retired Navy aviator and NASA astronaut, was a crew member aboard the space shuttle Endeavour in Nov. 2002.  During the mission delivering cargo and crew to the international space station, Herrington performed three spacewalks.  He carried the Chickasaw Nation’s flag, a braid of sweetgrass, two arrowheads, and six eagle feathers to honor his heritage. 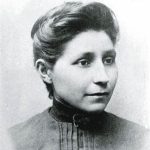 Other remarkable contributions came from Susan La Flesche Picotte (Omaha tribe). Picotte was the first Native woman to receive a medical degree in the U.S. in 1889.  Growing up on her Omaha tribe’s reservation in Nebraska, she once watched a tribal member die as a local white doctor refused to provide her care. Picotte eventually returned to Nebraska to practice medicine, setting up a private practice serving Native and white patients. In 1915, just two years before her death, she opened her hospital on the Omaha Reservation.  This had been her life’s dream. Today, it is home to a museum honoring her legacy.

Fast forward to March 18, 2021, when now Secretary Deb Haaland (Pueblo of Laguna) made history when she became the first Native American to serve as a cabinet secretary. This followed her time in Congress as one of the first elected Native women. From humble beginnings in New Mexico as a single mother on food stamps, she eventually earned her law degree from the University of New Mexico. She ran a small salsa business before her election to the board of directors of one of the largest tribal gaming enterprises in New Mexico.

Mary Peltola (Yup’ik) also made a historical stride becoming the first Alaska Native sworn into U.S. Congress and the first woman to represent Alaska in the U.S. House. This brings important representation for rural and Native communities and all Alaskans in general, a place that her ancestors called home for thousands of years.

The past two years have seen landmark increases in funding. From added funding for tribal elder services programs, catch-up funding for the battered Indian health system to first-ever appropriations for Indian Health Service elder-focused work on dementia and Alzheimer’s. Greater attention to abuse of elders and women has also come through dedicated Victims of Crime Act Funding and partnerships between tribes and Adult Protective Services programs.

Following the devastating crisis that COVID-19 wreaked upon Native communities and people, it is essential to stop and reflect on our history and successes. However, we must take care not to pause too long. There is still much work to do–particularly on the unending pursuit for social and health equity for our Native elders.

“Native American people—and our nation as a whole—are best served when tribal governments are empowered to lead their communities and when Federal officials listen to and work together with tribal leaders…,” according to President Biden.

We look forward to celebrating the lives and accomplishments of older Indigenous people and communities–not only this month but every month. We continuously look forward to meaningful and measurable improvements in the lives of our elders.

You also can sign up for our Brain Health E-News here.
EmailFacebookTwitterLinkedIn