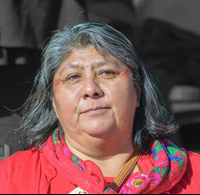 My name is Carla Eben. I am Northern Paiute; my band name is the Cui-ui Eater from Pyramid Lake, Nevada. My Paiute Name is Sandy Soil Dry Earth Flower, or Desert Flower, which was given to me in Ceremony. I am currently the Numaga Senior Services Director at the Pyramid Lake Tribe. I started there in 2017.

I wanted to share with you a story about my experience as a Dementia Friendly Nevada Champion.

BUT FIRST, Let me take you back to what inspired me to become a Champion in the first place…

In the Fall of 2017, I made a two-hour drive on Interstate 80 to Winnemucca, Nevada, to my first-ever training on dementia. I was excited to be going to learn something new.

In training, we learned all about dementia. The presenter used very vivid real-life examples. She defined the disease, described symptoms, and shared statistics. It was really sad to hear.

After the session was over, she asked if we had any questions.

I noticed I was the only Native present, so I asked her if she sent her announcement out to Indian Country.

Her response was: “Yes, but they never come!”

As I drove home that evening, I kept hearing her words over and over again, “Yes, but they never come!”

Before I reached home, I decided that I was going to change that.

The next day, I emailed the health center on our reservation to ask if IHS [Indian Health Service] does any types of training on dementia. I asked if we had a doctor that specialized in serving our elder population. To both questions, the answer was no.

Next, I reached out to a friend from the Cooperative Extension office at the University of Nevada, Reno (UNR). I excitedly told her about the training I attended. I told her I needed someone to come and do a training at Pyramid Lake on dementia for our elders and our caregivers.

About a week later, I received an email from her. She had found Dr. Jennifer Carson at the UNR Dementia Engagement, Education, and Research (DEER) Program. We scheduled a meeting with Dr. Carson. She said she had never worked with any tribes and would be excited to do so. Over several meetings, we planned our training. It was a good learning experience for both sides. As I learned more about dementia, Jennifer learned more about the Northern Paiute Tribe.

In 2018, with Jennifer’s help, I applied for a grant from the State of Nevada Aging and Disabilities Division to start Nevada’s first dementia-friendly community group within a tribe. Pyramid Lake Paiute Tribe won! We named our group Pesa Sooname Advisory Group. “Pesa Sooname” is Northern Paiute for ‘good thought’ and ‘good think.’

This grant followed the collaborative Dementia Friendly America (DFA) model. It is designed to help different “sectors” of a community become educated and more inclusive of people living with dementia. But our reservation, like many others, doesn’t have the usual “sectors” like businesses, hospitals, banks, restaurants, etc. So, we had to be creative and change the model to fit our tribe. We focused on our departments, including the Health Center, Social Services, Mental Health, Emergency Response, Victim Services, Tribal Court, Tribal Administration, Housing, etc.

As a first step, Pesa Sooname worked with the UNR Sanford Center for Aging to complete a comprehensive Dementia Community Needs Survey. Based on what we learned, we created three objectives for the project:

We created the last objective because we realized that neighboring tribal communities might not have the resources to bring training to their reservations on brain health and dementia.
We hosted several community education sessions for members of the tribe, and in 2019 hosted the first Nevada Tribal Summit on Brain Health and Dementia. More than a hundred people from 14 different tribes and national speakers from across the country came together for the Summit. The Healthy Brain Initiative Road Map for Indian Country was a big focus of the Summit. We incorporated our Native traditions, including opening prayer, a traditional Northern Paiute song, and color guard to and recognized “all our relations,” past, present, and future. At the end of the Summit, 100% of participants said this should be an annual event. 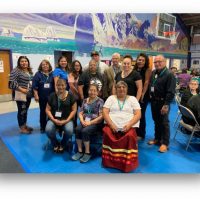 Our efforts have been recognized and are actually featured in the Road Map for Indian Country! After the Summit, we hosted a talking circle with members of my tribe, using the questions in the Road Map to identify a new set of goals for brain health. Later, I was asked to be on a panel at the National Title VI Training in Minneapolis, Minnesota, for Dementia Assistance for Indian Country. I have spoken to quite a few groups about our work.

I am content that we accomplished all of Pesa Sooname’s original goals. Also, that we have established a partnership with Jennifer at UNR and other non-tribal agencies in Northern Nevada.

Dementia is definitely on the rise in Indian Country. The more we learn about it, the better we can help our Elders and tribes.  I am excited to see where we go from here.